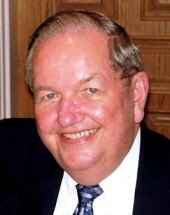 Stanley D. Andersen, of Fairfield Harbour, NC passed away July 16, 2012 in New Bern, NC. He was 76. He was born in Kingston, NY, son of the late Stanley H.D. and Joanna Kostecka Andersen. He graduated Valedictorian of Saugerties High School, class of 1953 and then from Union College, class of 1957, and ROTC at Union College. For many years he was a programmer at I.B.M., Poughkeepsie. He retired in 1993. Mr. Andersen served as Asst. Town Clerk, Bridgeton, NC. While living in Poughkeepsie, he was a member and past president of the Kevin Barry Irish Club, Poughkeepsie. After moving to Fairfield Harbour, NY he was a member and past treasurer of the Navy League, New Bern, and 3rd degree member of Knights of Columbus Council No. 3303, New Bern. Beloved husband of 54 years of Margaret "Gretta" Andersen, loving father of Theresa Vanyo and husband Mark of Hurley, Stanley John Andersen and wife Beate of Arlington, Va., Kathleen Andersen and fianc Michael Creighton of Vernon Hills, Il., and grandfather of Katy Vanyo and Patrick Andersen, brother of Charles H. Andersen and his late wife Margaret of Seattle, Washington. Nieces and nephews also survive. Stan's greatest life enjoyments included the births of his grandchildren, and retiring to Fairfield Harbour, N.C. where he golfed as long as he was able. A Memorial Mass will be celebrated at St. Paul Roman Catholic Church, New Bern, N.C. on Friday at 11:00 a.m. In lieu of flowers, donation may be made to St. Paul's Roman Catholic Church Building Fund, 3005 Country Club Rd., New Bern, NC or the memorial page set up for Stanley D. Andersen on the American Heart Association website www.heart.org.
To order memorial trees or send flowers to the family in memory of Stanley D. Andersen, please visit our flower store.