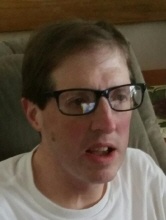 Steven Michael Goode, 46, of Lake Katrine, died, Thursday, October 8, 2015, surrounded by loved ones at Vassar Brothers Medical Center. Born in the Bronx, he was a son of John J. & Rachel Russo Goode of Lake Katrine. Steven was a sports fan and a New York Mets fan. He enjoyed music, specifically the Doobie Brothers and Kiss. He also loved to gamble at Foxwoods. In addition to his parents, Steven is survived by two brothers, John J. Goode, Jr of Concord, NC and Christopher T. Goode and his wife Brigette of Saugerties, two nieces, Katelyn, Danielle, three nephews, Ryan, Aiden and Anthony. Several cousins, aunts and uncles also survive. Steven will be reposing at the Simpson-Gaus Funeral Home, 411 Albany Ave on Sunday, October 11, 2015 from 2-5 PM. The funeral procession will form from the funeral home on Monday at 10:00 AM. A Funeral Mass will be celebrated at 11:00 AM at St. Joseph Church. Interment will be private. The family requests that in lieu of flowers memorial donations be made to the Marfan Foundation, www.Marfan.org
To order memorial trees or send flowers to the family in memory of Steven Michael Goode, please visit our flower store.