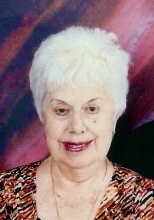 Theresa P. Paulus, 91, of Kingston, died Tuesday, January 24, 2017 at Golden Hill Nursing & Rehabilitation Center. Born in Brooklyn, she was a daughter of the late Antonio & Concetta de Matteis Simeone. Theresa was a loving mother, grandmother and great-grandmother, who loved to laugh and always thought laughter was the best medicine. Theresa is survived by her daughter, Linda T. Chick and her husband, Matthew of Wallkill, two grandchildren, Jonathan Dziewiatowski and Stasha Dietz, three great grandchildren, Seamus, Lucille and Grace, a step daughter, Dottie Paulus of Boca Raton and a step son, Bruce Paulus and his wife Kathy of the Bronx, two sister in laws, Sue Bickert of Ulster Park and Gladys Skura and her husband, Vincent of Vero Beach, FL, a brother in law, Robert Paulus and his wife, Rosemary of Kingston. Many nieces and nephews also survive. In addition to her parents, Theresa was predeceased by her husband, William Paulus and a daughter, Diane Imperato. Theresa will be reposing at the Simpson-Gaus Funeral Home, 411 Albany Ave on Friday, January 27, 2017 from 10:00 AM to 12:00 PM. A Funeral Service will be conducted at 12:00 noon at the funeral home with Pastor Justin Johnson from Trinity Lutheran Church, officiating. Interment will follow in Montrepose Cemetery. The family requests that memorial donations be made to the Alzheimer's Association, 2 Jefferson Plaza, Suite 103, Poughkeepsie, NY 12603-4027 or the American Cancer Society, Memorial Processing, 6725 Lyons St., East Syracuse, NY 13057.
To order memorial trees or send flowers to the family in memory of Theresa P. Paulus, please visit our flower store.