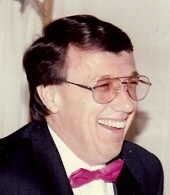 Thomas W. Rigney, 68, of the Town of Ulster, died Monday, August 4, 2014 after a courageous battle with pulmonary fibrosis. Born in Kingston, he was a son of the late James C. & Winifred O'Reilly Rigney. Tom was a veteran of the US Airforce having served during the Vietnam War. He worked for IBM from 1981 until he retired in 2009. He enjoyed golfing, kayaking, hiking, biking and automobiles. Tom is survived by his wife of 43 years, Beverly Nichols Rigney, whom he married on October 17, 1970, two daughters, Jill Delaney and her husband Michael of Clifton Park, NY and Pamela Rigney of Kingston, a brother, James Rigney and his wife Carole of FT Lauderdale, FL, a sister, Darlene Herring and her husband Jonathan of Kingston. Three grandchildren, Keira, Liam, Jackson and several nieces and nephews also survive. Tom was also a godparent to many children. In addition to his parents, Tom was predeceased by his daughter, Stephanie Rigney who passed in 1980. Tom will be reposing at the Simpson-Gaus Funeral Home, 411 Albany Ave on Thursday, August 7, 2014 from 2-4 and 7-9 PM. The VFW Post 1386 will conduct a service at 7:30 PM. A Funeral Service will be held on Friday at the funeral home at 11:00 AM with Rev. David M. Brechter officiating. Interment, with military honors by Joyce-Schirick Post 1386 Color Guard, will follow in St. Mary's Cemetery. The family requests that memorial donations be made to the Fair Street Reformed Church, 209 Fair St. Kingston, NY 12401.
To order memorial trees or send flowers to the family in memory of Thomas Rigney, please visit our flower store.