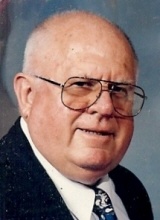 Vincent J. Schrader, 86, a lifelong resident of Kingston, died Tuesday, June 9, 2015 at HealthAlliance Hospital Broadway Campus. Born in Kingston, he was a son of the late John L. & Katherine Tomaszewski Schrader. Vince was a veteran of the Korean Conflict having served in the US Army. He was a life member of the VFW Joyce-Schirick Post 1386, where he was the past commander from 1969-1970. He was a life member of the American Legion Post 150, a member of the IBM Quarter Century Club, the Kingston Bowlers association. Vince worked in quality control at Hercules Powder Co and he was the Senior Fire Safety Facility Coordinator at IBM. He played the saxophone and clarinet in various bands. He was also a parishioner of St. Mary's Church where he served as an usher. He is survived by his three children, Debra Ann Campbell and her husband Brian of Lake Katrine, Katherine E. Schneider and her husband Jay of Gainesville, FL and Elaine E. Miggins and her husband James of Kingston, brothers John Schrader of Kingston and Nicholas Schrader of Kingston, five grandchildren, Michael and Erika Campbell, Jared Schneider, Cortney Miggins and Abigail Miggins. Many cousins, nieces and nephews also survive. In addition to his parents, Vince was predeceased by his wife of 49 years, Theresa A. McCloskey Schrader, whom he married on October 9, 1954 and a brother, Daniel J. Schrader. Vince will be reposing at the Simpson-Gaus Funeral Home, 411 Albany Ave. on Friday, June 12, 2015 from 4-8 PM. A service by the Joyce-Schirick Post 1386 Color Guard will be conducted at 5:00 PM. The funeral procession will form from the funeral home on Saturday at 9:00 AM. A Funeral Mass will be celebrated at 10:00 AM at St. Mary's Church. Interment, with military honors by Joyce-Schirick Post 1386 Color Guard, will be in St. Mary's Cemetery.
To order memorial trees or send flowers to the family in memory of Vincent J. Schrader, please visit our flower store.