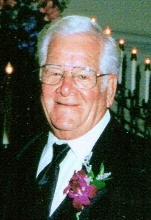 Vincent R. Guido, Sr. of Violet Place, Woodstock died Monday, May 5, 2008 at Benedictine Hospital. He was 84. He was born in East Kingston on May 2, 1924, a son of the late Alexander and Josephine Nardi Guido. Mr. Guido served in the US Army during WW II in the Pacific Theater of Operations. For 35 years he was an insurance broker for Metropolitan Life Insurance. For the last 15 years he has been an independent insurance broker. Surviving are three sons Vincent R. Guido of Kingston, David M. Guido of Woodstock and Mark L. Guido of Albany; four grandchildren Vincent Guido III, Danielle, Matthew and Mark Robert Guido; one great granddaughter Juliana Guido; three sisters Ann McCloskey of Kingston, Mary Daron of Stone Ridge and Margaret Bruck of Kingston; many nieces and nephews. Three sisters Irma Duncan, Ella Clausi and Julia Simpson and one brother Michael Guido all died previously. Reposing at the Simpson - Gaus Funeral Home, 411 Albany Ave. on Wednesday 2-4 and 6-8 PM. A Funeral Mass will be celebrated on Thursday at 10:00 AM at St. Colman's Church, East Kingston. Inurnment will be in St. Mary's Cemetery at a later date. Memorial contributions may be made to St. Colman's Church, 18 Brigham St., East Kingston, NY 12401.
To order memorial trees or send flowers to the family in memory of Vincent R. Guido, Sr., please visit our flower store.