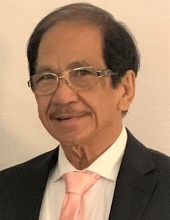 Virgilio M. de Perio, known to his family as “Chugi” and his friends as “Virgil,” passed away on Tuesday, February 16, 2021. He died unexpectedly from complications due to COVID. He was 77.

Born in Subic, Philippines, Virgilio was the fifth child of the late José T. and Soledad M. de Perio. A big-hearted man with a zest for life, Virgilio was devoted to giving his family the opportunities for which he struggled. He is fondly remembered by his children for his tough love and his high expectations for them, instilling in them the importance of educational achievement, hard work and sacrifice, and above all, the love of family.

A graduate of Arellano University in 1963, Virgilio went to work for the Philippine Refining Company. He began his immigration process to the United States in 1970 and worked as a Lead Man in Park Nameplate Co., Inc. He married Purificacion Navasca in 1978 after a two-year long-distance courtship. After marriage, he settled into a career in healthcare, serving as an orderly at both the Rego Park Nursing Home and Flushing Hospital and Medical Center, and worked as a transporter at Flushing Hospital and Medical Center until his retirement.

Family and friends will also remember Virgilio’s entrepreneurial spirit. For over 15 years, Virgilio also ran his own roasted lechon business that would draw the attention of many Filipino families in the nearby community.

Virgilio was able to fulfill one of his dreams to travel the world with his wife, Purificacion, after retirement, visiting parts of Asia, Europe, the Middle East and Africa. When he was not traveling, he enjoyed gardening, fishing, and playing on the pickleball courts both in Las Vegas and in New York. His greatest enjoyment was being with his love, Purificacion.
Virgilio is survived by his daughter, Jessica de Perio Wittman and her husband Philip of West Hartford, CT, his son, Jonathan de Perio and his wife Pauline of Queens, NY. He is also missed and lovingly remembered by his grandson, Jack Wittman. He is also mourned by his sister Angelina Abad and her husband Victor of Queens, NY, his brother Dr. Anthony de Perio and his wife Nancy of Las Vegas, NV, and his sister Josefina Faustino and her husband Rene of Las Vegas, NV. Additionally, he is also survived by a brother-in-law and sister-in-law, cousins, nieces, nephews, and their families.

In accordance with Filipino Catholic tradition, a socially-distanced prayer service will be held on Saturday, March 27, 2021 at 3:00 PM at St. Peter Claver Church in West Hartford, CT, followed by a mass offered in his name. In lieu of flowers, memorial donations to the Miracle League of Connecticut, 68 South Main St. BSMT 100, West Hartford, CT 06107, are welcomed.

A Mass of Christian Burial will be celebrated on Saturday, February 12, 2022 at 10:30 AM at St. Gregory the Great, and an inurnment will be held at Mt. Calvary Cemetery, Cheektowaga, New York.

Simpson-Hammerl Funeral Home is honored to assist the family of Virgilio with the arrangements
To order memorial trees or send flowers to the family in memory of Virgilio M. de Perio, please visit our flower store.