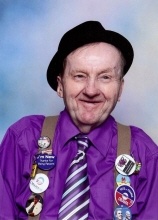 Walter "Wally" McDonagh, a longtime resident of Neighborhood Road passed away on Saturday, April 6, 2013 at HealthAlliance Hospital. He was 71. Wally was born in Brooklyn and has lived in this area for 14 years. A longtime employee at Ulster - Greene ARC, Wally worked as a escort, assisting others to their clinic appointments. Proud of his work, he could often be found with this clipboard in hand directing others. He enjoyed assisting others, sporting events, shopping and traveling. Wally enjoyed collecting memorabilia and took pride in his collection of pins, most notably his Obama pins and jewelry (some of which he made himself.) A fried to all, Wally advocated for his needs as well as his longtime roommate Peter Zwicker. He will be most rememebered for his strong will, opinionated but concern for the well being of others. Wally had a great sense of humor and his favorite phrase was "Heavy Duty!" which he used to get a rise from his peers. He touched the lives of many and leaves behind many good friends. Friends may call on Thursday from 11:30 - 12:00 at Simpson - Gaus Funeral Home, 411 Albany Ave. A celebration of his life will be conducted at 12:00. Interment will follow in Montrepose Cemetery.
To order memorial trees or send flowers to the family in memory of Walter "Wally" McDonagh, please visit our flower store.