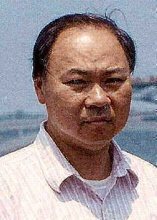 William Eng, formerly of Kingston died Monday, September 26, 2011 in Flushing, NY at the age of 76. He was born in 1935 at Nai Chung village near Taishan City, Guangdong Province, China, to the late Bing and Gam Yook Eng. In 1948, at the age of 13, William and his mother immigrated to the USA to join his father in Kingston, NY. In 1951, he became a naturalized US citizen. In 1960, he traveled to Hong Kong to marry Yim Ling Chan. His father Bing and uncle Paul had established the Kingston Tea Garden at 304 Wall Street in 1934 where the family business took root. William relocated the Kingston Tea Garden to 298 Wall Street in 1966, where it flourished for many years. Being very active in his religion, he helped to establish a Buddhist temple in Flushing, NY in the late 1980s. He retired from the restaurant business in 1999 and enjoyed frequent travels back to Nai Chung village in China where he personally funded projects such as repairing roads, adding street lighting, adding waste removal and repaired family properties. Beloved husband of the late Yim Ling Eng; loving father of his first son Henry, second son Hogan, late first daughter Wendy and second daughter Ara; brother of Joyce and Ernest. Friends will be received at the Simpson-Gaus Funeral Home on Tuesday from 2 - 4 PM. A private inurnment will be in The Evergreens Cemetery, Brooklyn.
To order memorial trees or send flowers to the family in memory of William Eng, please visit our flower store.